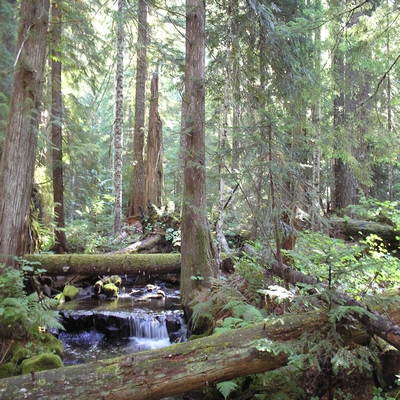 There are two trails that start on the east side of forest road 30 or the Wind River Rd across from the Old Man Pass parking area. Trail 150 and Trail 151

Trail 151 is the southern most one. This trail heads easterly on a moderately downward slope.

The first half-mile or so runs along what feels like a wide ridge back. The trail is straight and increases its pitch just slightly as it progress down into the valley below.

At about a half mile the trail turns towards the north. Maintaining the same angle of descent.

At the bottom of the valley are the headwaters of the Wind River.

The trail crosses two forks and the first is nothing but a muddy area when I crossed it in the month of September. There had been a bridge but it is gone, with all that remains is just a pile of logs and planks strewn around. The second crossing has a much better bridge.

The river here is a wide stream, running through large boulders and rocks. It meanders, first northeast, then toward the west, then back to the southeast, forming a small tree covered peninsula.

Tall conifers stretch high above this portion of the trail. It is a beautiful deep forest setting.

The trail starts to climb immediately out of the valley. After a quarter mile or so the trail has a couple of big rollers, probably 20 feet high.

After the rollers the trail turns toward the east and starts to climb in earnest. The pitch is much more radical than the slope coming down. I have a hard time making it to the top in my lowest gear range. I have to stop a couple of times to let my old hart and respiration regain a comfortable rhythm.

At the top of the hill and the end of trail 151, are the remains of an old Indian encampment. This area was the summer home for the local Indian tribes, and the Washington State University has excavated the area.

As a matter of fact about twenty-five years ago, I met the man who had found the encampment. We worked together rafting logs on the Columbia River for a couple of months. He had told me about the area, and how the University had done a dig there after his discovery. The area is mostly just a bunch of dirt mounds now.

Trail 157 starts about a half-mile down the gravel road that runs along the south edge of McCllan Medows.

The trail climbs away from the meadow through smaller timber. Winding up a moderate grade.

While I was stopped catching my breath, a group of younger mountain bikers came by, their bikes in low gear, peddles rapidly whirring around as they passed me by. The level of difficulty here has to be one measured in age and experience.

This portion of the ride has some moderate grade, but most riders in good condition should be able to make the ascent with little difficulty.

I measure the difficulty in descent of the grade by how far back on the bike you have to hold your weight and portions of this ride had my weight back over the rear tire, my arms outstretched, and concentrating on not involuntarily applying the front break when my bike dropped over a root or rock fall in the trail.

The ride I am describing is an out and back. Up to the road at the end of trail 157 and back to the trailhead of 151 at Old Man Pass.

On the return trip, I did take a little side trip for about a mile out and back, along the bluff overlooking the small gorge that trail 151 crosses. This short side trip, starts at the same place as the return trail 151.

As a matter of fact, it would be easy to miss the trail and start riding down the double track that runs along the ridge.

There are a couple of vantage points along the double track here that are great for taking pictures, and just observing. While standing on one of the ridge outcroppings, a large crow flew up out of the gorge below; its wing beats breaking the silence.

One option on the return ride is to continue down the road to the ski park for McClelin Meadows and take the trail that runs parallel to forest road 30 and end back at Old Man Pass parking Area.

I have ridden this route as an out and back twice now and on the second trip I had a hart pounding experience. One that I will never forget.

Shortly after starting up trail 157, after the initial climb, the trail levels off somewhat. Then it continues up on a more gradual slope. I guess it was about three quarters of a mile up the trail and I heard a tremendously loud buzzing sound.

Puzzled, I looked around and about ten feet behind me, and along side the trail was a dead deer. The buzzing was the sound of flies.

As I stood there straddling my bike, looking at the bright red flesh of the deer, an almost undistinguishable lump along side the trail, I couldn't help wondering how I missed that as I road by.

I got a whiff of the gutted animal and turned to ride on up the trail.

As I looked at the trail before me, I could see fresh footprints from what I assumed was a hunter. It was early fall and bow hunting season was under way. I figured that a hunter had downed the animal and taken just the parts he wanted, leaving the rest for the scavengers.

After reaching the turnaround at the upper trailhead, I started my downhill ride back.

As I approached the area where the deer had been killed, I started thinking that one of the scavengers may have shown up, namely a bear, and I should start ringing my bell.

I have a bell on my bike to warn others, or bears, that I am on the trail. I normally ring it when every my visibility is less the twenty feet or so, just incase there is someone coming the other way.

I was coming over a rise and probably a hundred feet from the deer carcass when I flicked the ringer on my bell. Just as I did so, a mountain lion leaped from the downed animal, and into the woods. A couple of large, at least twenty foot, leaps, and the lion disappeared into the woods.

I slammed on my breaks and stood frozen for a second. Not really comprehending what I had just seen. The mountain lion was huge! It looked in size, like the female lion I saw in the zoo. I must have been in shock as I stood there thinking about how quickly it had moved, and how far it had bounded.

I reached down and pulled the safety off my bear pepper spray.

I headed down the trail at full speed, past the bloody red lump that once was a deer.

The adrenalin pumping through my body, I covered the next quarter mile or so a break neck speed. I hit the top of the last down hill section and slamming on my breaks. I stopped and quickly looked behind me, back up the trail.

All was clear, and I bombed the rest of the trail.

The Falls Creek trail ride starts at the same point and follows this route to forest road 65. Then continues on, see my ride description for Falls Creek. 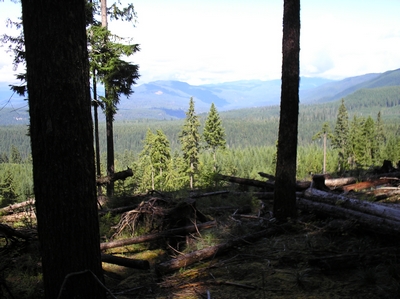