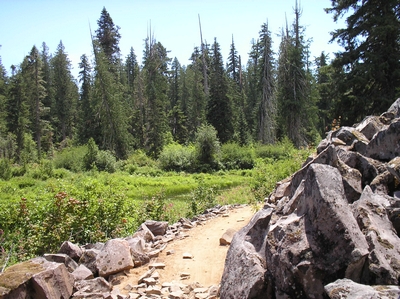 This ride was done with the PUMP(Portland United Mountain Peddlers) group. It was done as a shuttle ride where we left a couple of cars at the highway junction of FS30 and FS3062. Then we took the bikes up to the Old Man Pass parking area. From the parking area there are two ways to start the ride

Take trail 151 down across the headwaters of the Wind River. The Wind River is nothing more than a stream here. I personally prefer the 151 trail because it is a nice single track that goes down through a beautiful wooded area. The trail terminates at FS3053 and is a little over 2 miles in length. It has a very radical (short but very steep) climb out of the Wind River valley.

The other trail is 150 and it runs about 1-1/2 miles toward the north until it reaches FS3053. The grade on this trail is not as radical, but this trail does add about a mile to the ride.

From trail 151 it's a short quarter mile or so to the 157 trail head. Forest road FS3053 makes a hard right and the trail head is right on the corner. It is very obvious.

The 157 climbs for a short while, then descends to a foot bridge of logs laid parallel across the creek. The bridge is ride-able, but I do know that one of the PUMP riders on a previous ride fell off of this or the next bridge and broke his leg. The trail climbs up and over another ridge, and down and across the second bridge. I prefer to walk across these two bridges. Then trail 157 climbs a bit more and crosses a dirt road FS6701.

The trail becomes more rolling; all the climbs here are short. There is a lot of lava rock and root obstacles to overcome but nothing serious with the trail ending at forest road 65 (FS65).

From there you have to ride down the road a short ways to the horse camp. Now I am not sure, but I think the trail, which is 171 can be accessed from the road. The group I was with turned off the road and wandered a bit through the horse camp following camp trails until we found trail 171. It was not real obvious, but the main trail was more pronounced and came from the direction of the road

Trail 171 has some excellent downhill stuff. It is somewhat technical but a lot of fun to ride.

There was one rider in front of me that went over the handle bars soon after we started down trail 171. He said he was going to slow and leaning a little too far forward on his bike. All I saw was him doing a summersault with his bike still attached to his clipless shoes. Fortunately he was not hurt; he remounted and continued on down the trail.

I don't think I had to ever dismount in this section, although there were a couple of spots where I had to stick one foot down and scooter along through a rock garden.

Trail 171 crosses FS6701 after a few miles, and turns into a double track for a short distance. The trail along here was very rough.

The ride went very fast and some of it turns into a blur. Some double track a little single track then some more double track.

"Hey! Was that a big, I mean giant lava hole in the ground"? That we just went screaming by. This can be one of the down falls of ridding with a large group, speed. The ride for our group was fast, at times too fast. I am going to have to go back and check out the lava formation.

Later when I was mapping the ride, the map shows this area has lava caves.

The trail hits a road along here, a spur that does not look accessible by vehicle, but has a lot of lose gravel on it. The point is the trail makes a right angle turn off this road that would be easy to miss.

The trail travels across a rock slide next to a small pond, then back into the woods. We regrouped a short while later at the falls area of Falls Creek

The last leg of the trail consists of a few miles down a very steep section of trail.

From the falls area the trail crosses a wide open large timbered area and cross over a ridge. Then the serious part of the ride starts. The next couple of miles are very steep.

Now here is the good reason to ride with a group or at least not to ride alone.

One of the riders just a little ways in front of me, during the descent of a very steep section of trail, caught a root, and lost the trail. His bike slipped of the edge, and he went over. Hitting his head on a tree, he continued, just missing a limb stub sticking out of a dead tree lying on the hill side. Landing about 30 feet down slope from the trail. There were a couple of riders that went by and did not see him, because the hill side is so steep, I am sure they were concentrating on the trail. He may have been unconscious. He didn't think he was. The next group of riders spotted him and when I came on the scene he was sitting up and they were handing his bike up the hill. The hill side was so steep that it was a struggle for him to climb up. Reaching forward to steady himself against the hill as each step caused him to slide. Looking for roots, braches, wads of grass to grab hold of. Once he was up, he complained of neck pain and it was suggested that he sit down while one of us went for help, but he wouldn't hear of it.

His helmet did not show any serious damage so he may have been ok, he insisted on continuing on so we headed down the trail. He kept his head very erect, and I mentioned a couple of times that I thought he should go the emergency room for an x-ray. We finished the descent and crossed Falls Creek on a foot bridge, heading down the trail a few hundred more feet to a parking area. Then another couple three miles down the road to where our cars were parked.

The rider who crashed never did seek medical attention. I spoke with him a couple of months later and he said he just went home and took some aspirin. 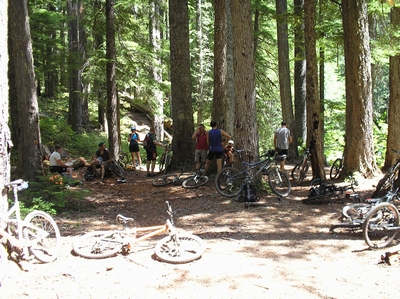