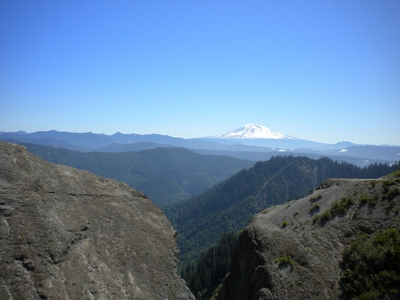 From the parking area the trail starts with some challenging short burst climbs and quickly serpentines to a ridge that overlooks the Muddy River flow.

The trail weaves in and out of brush and timber as it climbs steadily. There are lots of exposed roots and rocks in this section of the trail.

Half a mile up the trail, there are some great views of the mountain and the wide open plane of the mud flow. My first ride on this trail was a solo ride. It was late fall just a week before hunting season and there were two great herds of elk on the mud flow. I counted 24 elk in one herd.

The trail turns toward the east, moving away from the mud flow and starts into a forest of second growth timber.

The trail winds in and out following the ridges. The ride here smoothes out and there is almost no rock or root to negotiate. This section is an easy climb with a few level areas. The track is narrow and firm.

Another mile or so and the trail enters an old growth forest and starts to climb in earnest. The side slope is very steep; the track is very smooth and almost doubles in width. I do not recall even one root wad or any rocks. This section is a grind in low gear and I always have to stop a few times to catch my breath.

I have read some reviews on this trail by other riders, and depending on your experience level, this section can be anywhere from a breeze to scared stiff. The scary part is that the side slop is extreme. If the trail was narrower, it might make me apprehensive.

After a mile or so and a half dozen switch backs, the trail crests over the top of a ridge. As the trail moves over the top of the ridge it has started to narrow. The vegetation starts changing to include a lot more underbrush and fewer trees. Finally the trail turns toward the north again but on the east side of the ridge. The vegetation has become all underbrush; it is almost like a tunnel, but the track still continuing to climb.

The trail now follows the ridge line. It moves from the east side to the west side of the ridge numerous times. With some very narrow areas as it crosses the ridge where close attention to the trail is a must and there are a couple of exposed areas where the penalty for a mistake could be high.

The vegetation changes from old growth timber to thick brush. On the east side of the ridge, the trail runs through thick brush. When it crosses back over to the west side, the brush gives way to tall timber and on top of the ridge it is a mix of timber and brush.

On my first ride, it was soon after the trail crossed back over the ridge that I spotted a second herd of elk. They were hundreds of feet below me. Most of the elk were laying down resting but there was one elk standing among the herd, he may have been a lookout. I got a much closer look at this heard than the last. Since I had seen the other herd moving away toward the west, I am sure this was a different herd of elk.

The trail crosses back over the ridge and starts a short descent. It gets a little narrower here, and there are a few more roots and rocks, but very easy stuff.

On my first ride I encounter small patches of snow once I got to around 4,000 feet. It had been raining and snowing in the higher elevations, all week. Although that day, there had been no rain, the clouds had rolled through the area, decreasing my visibility at times. In fact the higher I climbed, the poorer my visibility became. There was though one place as I crossed over a small ridge that juts out toward the west from the main ridge, that the clouds opened up and through a hole I could see a stark white mountain, with a bright blue sky behind it.

On that first ride, as I approached the end of the climb, I ran into snow. It was patchy at first then became continuous. It was very slick and I was unable to continue riding my bike, so I decide to walk it. I felt I had to be getting close to Lowett trail, which was my goal.

Visibility worsened until I couldn't see more than 25 to 50 feet. The trees had disappeared and I knew that I was above the tree line. A couple of hundred feet up the trail and I could hear a river or large stream below me. Off to my right, the east, there was an obvious drop off, the edge made a clear break between the snow and the cloud bank that I was in.

I could not see anything beyond that ledge. I could no longer make out the trail and the snow was about 4 inches deep. I could only see a few feet ahead of me and decided this is the end of my ride.

Later on subsequent rides I realized I was standing on top of the cliff that overlooks the Ape Canyon.

The return trip is almost all downhill. There are a few exposed sections and some small technical sections in the first mile or so, followed by a short quarter to half mile of easy uphill before a long continuous run back to the trail head.

The return trail has a couple of switchbacks that give me a little problem but I don't have to dismount more than once or twice.

It is a very swift descent that I always find myself amazed at how smooth most of the lower portion is. Perfect forest trail for a mountain bike, the only other trail that comes to mind like this is the lower half of the McKenzie River trail.

As the trail leaves the old growth timber just a mile or so from the trail head, it narrows just a bit and starts a great bit of flow. It follows the contour of the landscape instead of going up and down over the small ridges. This allows for some nicely banked corners and small dips as the trail flows in and out of the small valleys.

After about three quarters of a mile and the trail breaks out of forest and back onto the ridge that overlooks the Muddy River flow.

The final leg of the descent has a lot more technical root and rock sections. It keeps me further back on the seat than anywhere else on the trail. It is not steep but there is a lot going on and one part of the ride that I enjoy very much.

The total time for the descent is about a 1/4 of the time it takes to climb up. It is fast and exciting. 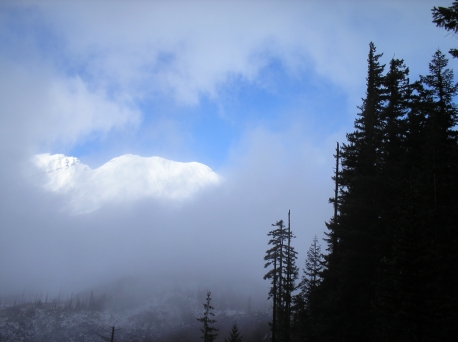