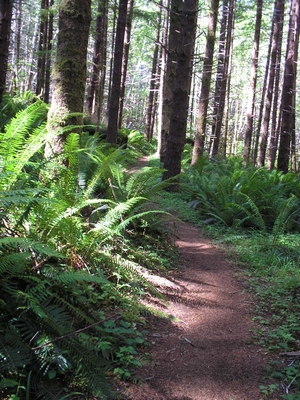 I met some people with the Bike and Hike bike store for a ride up to King Mountain. They were providing nice squishy bikes for demo if you so desired. I didn't so I didn't. The ride started at the Jones Creek camp ground day use area. The trail heads off toward the NE from there. A short easy climb then a short easy downhill to cross a creek. The creek has a single plank bridge that I avoided since I know that if I went to ride across it I would most likely fall of so I opted for the straight creek crossing. Wasn't bad. Then we climbed up to a road, with one switch back on the climb. Crossed the road and climbed to the top of the ridge, again no hard stuff, just low gear and bend forward over the front end a little. Once the ridge is made there is a short ride along just below the ridge, nice rolling stuff. Not hard to ride slight uphill. Then a nice little downhill run to the road, where we cross again. As the trail crosses the road, there is a short climb on the other side that was very soft and I had to get off and walk. Just about a ten foot climb. If you crank it up and get some momentum you can overcome the soft stuff. Then off through the woods and across a short stretch to an abandoned road. Some switch backs and short run through the brush to a very nice bridge. Here is where the real climb starts

As the trail leaves the east side of the bridge it starts up at a very sharp angle. The sharpest climb so far on the ride. It is too sharp for me to ride and I end up off my bike for the first of at least 6 times on this climb. It's not that I couldn't ride up this section; it's that I could not maintain the climb. I just don't have the wind to make the first incline, then the next 100 feet or so to the switch back and still be able to make the switch back. I walked up until it looked ride able and then road up and around the first switchback. The trail here has a very steep side slope. It climbs continuously for a good half mile. In and out of little gullies and making short sharp inclines in-between. At the second switchback the trail starts to climb onto a flat. That is flat in comparison to what you have just come up

I was able to shift up a gear or two here and cruse along through a beautiful lush forest. The trail heading generally south for a ways, then it turned back toward the north and east. A real rain forest here thick understory, filled with lots of large ferns and fir trees. This section was the best part of the ride for me both going up and coming back down. After about a half mile the trail starts to climb again and the side slope increases dramatically.

I had felt pretty good up to this point about not having to walk my bike, but the next section is so steep that I found that many sections, I just could not keep the front wheel on the ground. So steep that I just stuck my foot out and started walking my bike until I got to a section where I felt safe re-mounting and again leaning into it. Around another switch back and climb some more until the trail breaks out of the forest and onto a cliff

This is a very exposed section of trail and the next half mile or so is very dangerous. It is life threatening. There should be a warning sign. I know that some riders well just scoff at this, but the trail is lose aggregate, the incline of the trail slops toward the cliff edge. As you ride along, you can at points feel the tire slip sideways slightly. Now it is not all exposed! There are sections where there is a good 20 to 30 foot drop then a very sharp incline, other sections have timber on them, although the incline is very steep. One of the members of the group, decided this was far enough and after just a little more riding I too decided this was enough for me. The ride leader pointed across the valley we were standing above to a definite line across the facing hill side. He said that it was an old cat trail and this trail picked it up a short ways along. I stood and waited with the other rider for a while. In a short while we saw one of the other riders on the far side. After taking a break I decided to start back down.

When we hit the cliffs, the ride leader said they planned on turning around in another 15 minutes or so and heading back. I guess this had an influence on my decision to not continue the ride along the cliff. I ate a bite of sandwich and after a few minutes one of the rider leaders returned, I told him and the other rider that I was going to start back down and would wait at the bottom for them. He cautioned me to take a couple of breaks to let my break rotors cool off on the way down because it was such a steep descent. He told me that the last time he rode this trail he could smell his breaks on the way down because they had gotten so hot.

The descent was actually great. I don't normally like aggressive descents but this was not bad. The section of trail that crosses the plateau was perfect. First the descent is one where you have to position yourself way back over the back wheel to get your center of gravity far enough back. But the trail has a nice flow to it. Then it hits the plateau and I was able to get up a little higher and felt comfortable letting the bike run a little faster. Then the last descent, which again has a very sharp side hill, but not as bad as the upper part of the trail.

It was fun but I would not ride this again. The trail from kenning to Jones creek is much more fun. It too has some radical side hill, but I would ride it over this any day. I spoke with a couple of the gonzo riders and they had crossed King Mountain and headed down to what they called the swamp area. They said the climb on the other side was just as brutal, but they were very happy with the ride. 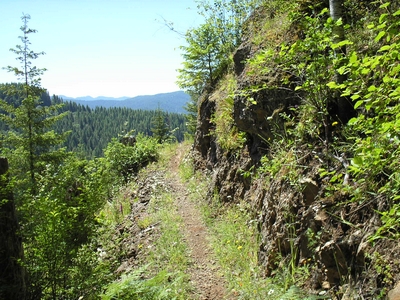