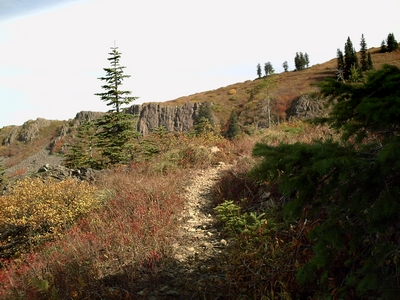 This is an out and back ride that is 6.5 miles one way. It has an elevation change of approximately 2500 feet, most of which is done in the last 3 miles before the turn around.

The trail head that I used is at the Tarbell picnic area.

From the parking area, the trail runs through the picnic area and away toward the east. Within a 1/4 mile, the trail intersects with the main tail coming up from Rock Creek Campground.

The trail skirts a clear cut on the west side. There are small groves of trees along the rocky path for the first half of mile. Then trail climbs along over roots and through medium sized rock for another 1/2 to 3/4 of a mile.

I have ridden this trail many times and unless I pace myself I always have to stop to catch my breath a couple of times long here.

There is one strong switch back, as the trail enters the forest that I always have a hard time maneuvering in either direction.

After the second switchback the trail levels off some for a few hundred yards, until you cross the forest road.

The trail crosses the same road three times. By the third crossing you cannot tell it is a road anymore.

After crossing the road, the trail meanders along for a short bit until it starts to climb again.

There are a number of areas along here that when it is wet, are very muddy and slick. Horses tear it up pretty good. The trail is much like the lower part, rock and root crossings on the way up. These same obstacles are lots of fun on the way down and there are numerous places to bank up on the side of the trail as you round corners.

After another mile or so, the trail crosses the road again. If you look to the west, you can see the road starts to lose its integrity

Half a mile more through the woods and the trail cross the road again. Now it is hard to tell that it is a road. It looks more like a wide trail, but very steep.

The Tarbell trail turns to the east for a short hard climb with a large root crossing at the very top. There is no way for me to make it over that root, ether on the way up or down. So I dismount and drag my bike over the root.

From here the trail starts to level off, there is a little more climb but the degree of steepness is very low

Soon the trail starts making a turn toward the east and the track becomes faster and starts rolling up and down (more down than up at first).

I love this section of the trail, as I tell people it feels to me like the trail is downhill in both directions. It is because most of the way for the next mile and a half the trail has swooping down hills that give you enough momentum that when you do go up hill, it is short and you can stand up, in a higher gear, and make the top in just a few peddle strokes. This is probably my favorite section in both directions.

Following the Chinook trail to the east it soon does some serious climbing. Just before the trail hits the fourth switchback it has turned from single track into a steep, lose rock covered climb with very few areas that are ride able going up.

For the most part the next mile or so is a hike a bike, with just a few sections ride able. The view though has become very nice, and as the trail climbs the view improves. The trail left the forest and the terrain is open meadow, very alpine like.

I have ridden the Tarbell trail many times but I have only done the section to the Silver Star trail this once. When I was about half way up to the Silver Star trail, I stopped to have some lunch. While sitting on a rock outcropping along the trail I could hear voices (and they weren't in my head). Soon I was joined by some hunters coming down the hill, through the meadow. There were three of them. It looked like three generations, a man who looked to be near my age, maybe in his late fifties, another man that looked to be in his thirties and a young boy, probably 14 or 15 years old. As they approached I could hear the boy complaining about hiking across the open terrain and wanting to take to the trail.

We talked for a while about the area and the trails around here. They had lived in the area most of their lives. The older man, looking at the bike, made a comment about how he didn't see how I could ride that thing on this trail, and asked, as he waved his hand in a northeasterly direction, why I hadn't just parked over in the parking lot and rode up Star trail. I sighed and had to admit that I didn't know there was a parking lot over there. Between him and his son, they explained how to get to the parking lot and how much better the trail was up above. He also made a point of telling me that I had a long climb ahead that was going to be steeper and rockier. Which I could hardly believe, but it was. Again gesturing, this time off to the northwest, the older man told me they were parked just over the ridge

I continued to climb, with very brief sections where I could actually ride, around another couple of switchbacks.

Then I could see where hunters had crossed the open area, and I shoved my bike up out of the rut, that was the trail, and started off across the field. I didn't cut off much of the trail, but it was a nice respite. The field was in fact very smooth in comparison to the trail. I even had visions of me riding across it on the way down, but knew I wouldn't because of the unpredictability, the inability to see all the possible obstacles through the tall grass

I did ride all the way down the trail on the return trip. My front tire is a nice wide 2.4 inches and handled the large rocks very well. I dismounted on almost all of the switchbacks though because of the off camber angle and lose rock. The old hard tail bike handled it very well, although I did break one of the stays in my saddle about half way down and was riding on one cheek from there on, hoping like hell that the other stay didn't break. Not that my butt was in the saddle much for the 2 1/2 mile descent.

After crossing the small stretch of open grass area and making trail again, it crossed in front of and over a large rock outcropping.

The trail turned again back toward the north and climbed up behind a small stand of fir trees. becoming ever steeper until it hit the Star Trail

The Star Trail is wide and, in comparison to the section of the Chinook Trail I just climbed, smooth (just in comparison, the Star trail is not a smooth trail). The angle of the trail was still steep, but I could ride here in low gear.

The view was spectacular all along the next mile. There are a few spots where the rocks became a little coarser and the trail a bit more challenging, but I was able to ride most all of it, although I made a lot of stops to catch my breath

About a half mile up there is a spot where the trail passes along the very top of the ridge and I was able to look both east and west. As I approached, a hawk took flight and flying at eye level, circled around a large rock outcropping to swoop past me again before disappearing off to the south.

The view toward the north held all three major peaks, Mt Adams, Mt Rainier, and Mt St Helens. Toward the west was a sea of low lying clouds, covering the valleys. The sun was shining and it was beautiful up here. I found when I got back down into the valleys that it was cold and misty and had been that way all day.

I had spent three hours from the Tarbell picnic area to get here. A half hour of which was spent talking to the hunters and eating my lunch. Since I had gotten a late start, I decided not to ride out to the Indian pits or around and climb to the old lookout on Star Mtn.

The ride back was fast and thrilling. The first section with the lose rock, was very challenging, and took me 30 minutes to make the descent.

The next 4 miles was so much fun. It is a fast pace along the 1 1/2 miles above Coyote Canyon and around Squaw Butte, the trail as I had stated earlier, with its rolling inclines that gave me enough momentum to make most of the climbs quickly and in high gear.

Then the 2 1/2 miles of downhill back to the picnic area is very fast with lots of banked corners, bouncing over roots and dodging rocks all the way.

There are a couple of options for increasing the length and difficulty of this ride. Starting at the Rock Creek Campground will add another 3 miles in each direction plus another 900 feet of climbing. The trail is good single track with a strong climb, which translates into a fast descent on the return trip.

You can continue on to the top of Silver Star Mountain, I have made this ride twice on my bike from the Silver Star Trail head located at the end of forest road 4109. This would add a little over a half mile each way and another 300 feet of climbing.

The last bit of trail to the top of Silver Star is large rock and rubble. It is very hard to ride and I have throwen myself over the handle bars twice in that section. Momentum and choosing the right line is very important. A 29er might help. 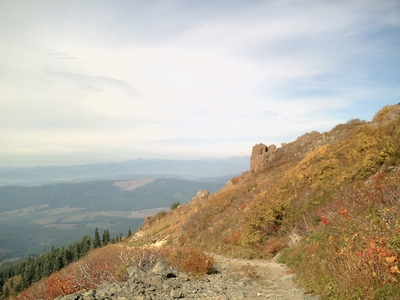