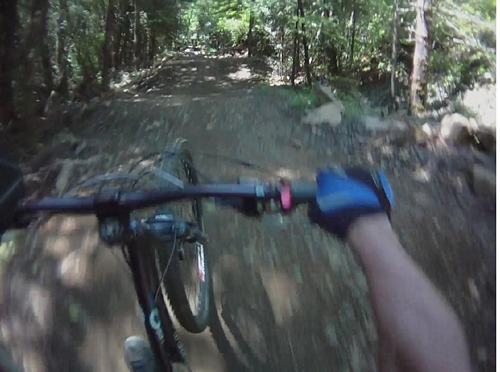 Length of Bike Ride: 12 Miles (or what ever you want it to be)
Difficulty: Moderate to Advanced
Suggested Skill Level: Intermediate to Advanced
Trailhead longitude and latitude: 45 22 48N, 122 01 38W
Google Trail Head Location

The Sandy Ridge trail system is designed with downhill running as the primary focus.

The trail system is accessed by climbing a paved road, which is gated off (although there is a sign warning of possible vehicle traffic). A constant grind the climb is a good three plus miles.

Paul and I took off like it was the Wednesday night road ride; let's see how fast we can get to the top. I pressed it hard for the first mile and a half then had to throttle back.

By the time we reached the trail system I was gassed. I took a couple shots on my energy drink and we started cranking out the new connector trail that led into Rock Drop Trail.

The connector was well laid out. The tread was a mixture of dirt and gravel. I was surprised at how much gravel there was, it affected the bite but the trail was not flat and manicured, it was a nice rolling line that followed the terrain as it twisted and turned its way through the forest.

This is a black diamond trail, but it can be rolled. I would not want to ride the line on a weekend, since I would just turn into an obstacle to be dodged by the armor clad warriors on their forty pound steeds. But on such a nice early Tuesday afternoon, there was no one there but Paul and me.

We blasted down the trail, hopping up onto the table tops and skidding over the trail kickers to fly up the banked corners and rollers that were presented as the line traced a path over the man made features and took advantage of the natural features at every opportunity.

Even this old guy was forced into the air a few times, my heart racing as I heard my front tire skid as it touched down.

The Rock Drop was a short three quarters of a mile that had me grinning from ear to ear.

The trail flowed from Rock Drop to Quid Pro Flow, which was anything but flow at the start.

Quid Pro Flow starts with a rock garden, the rocks are very uniform and the tread, although rough, is very ride-able.

The trail rumbles up and down as it traverses a hillside, offering up root and rock drops before presenting the next rock garden.

The second rock garden is much more challenging then the first, It is more a jumble of stones and I think it would require a few more attempts before I would find the right line. It pulled me from my bike in three places, one of which was right at the beginning so a restart allowed me to clear that section.

The line continued to traverse the hillside, with more root and rock drops and rolls until it flowed out into an old skidder road where it transformed back into a jump line, with lots of small kickers and big banked corners.

Screaming up and over large rollers and flying around the swooping fast berms my legs were burning as I flew through feature after feature.

I was actually happy to see the line flatten out as it ended in a grove of small deciduous trees and I coasted to a stop to shake the numbness from my hands.

The return line was a climbing line but laid out so that you climbed to gain a short bit of elevation, then descended to give you a quick short break, to return to the climb and repeat the action. This approach works well, allowing you to take the climb in short interval bursts and the short blast of descent allowed you to carry momentum into the next ascent.

There were lots of root ups and natural features to challenge me as we pressed the ride back to finish the loop which ended at a junction with the Three Thirty Eight Trail.

The Three Thirty Eight Trail was a climbing trail and a lot like the return line we had just ridden but with a little more sustained climbing, all at a low angle of ascent.

After about a half mile we came to the junction with the new trail Two Turntables and a Microwave or TTM.

I have been here one other time and this trail was not in at that time. On my first visit we continued on around on the Three Thirty Eight Trail and repeated the Quid Pro Flow before returning and descending on Hide and Seek.

The Hide and Seek trail from its junction with Three Thirty Eight to the creek crossing is just one rock or root drop after another. It is a very technical descent, even though the trail is considered a Blue line.

Now the new line, Two Turntables and a Microwave is a Black Diamond line.

The trail starts with a big rock drop that is really more of a launch for the young guys in full face helmets and armor.

We rode around the drop and the trail immediately presented a large banked corner that was followed by another banked corner and into a series of banked corners as the line dropped quickly down the steep hillside.

After a half dozen corners the trail started to traverse the hillside and presented a series of rollers or kickers.

The tread was a mixture of soil and rock, fist sized rough angular stone aggregate mixed with the soil to make a firm but fast tread.

It was like a roller coaster, fast screaming fun that forced me to stop a couple of times to let my legs and hands rest.

Every corner was a berm and lent itself to railing high to carry your speed into the next section of rollers and kickers.

I would always choose this descent over the Hide and Seek descent. Hide and Seek works you hard through the never ending root and rock drops as the trail descends across the face of the hillside.

I don't think I turned a crank, except to change my lead foot, until I reached the bottom of the trail.

The only really scary thing about this trail, besides the exposure in a couple of places, is that on a week end or even in the evenings during the good months, there are going to be some real fast riders hammering down this thing, but I guess that can be said for most of the trails up here.

The Two Turntables and a Microwave Trail junctions with the Hide and Seek trail just before the creek crossing.

Picking up the Hide and Seek trail at the bridge, it climbs up a moderate grade for a very short distance, offering an out to the paved road when it crests. The out provides a way to climb back up to the top of the system if you are so inclined or a way to climb up to here on the road.

Paul and I cranked our way up the trail until it broke and started the descent. The descent was fast and within seconds Paul started pulling away, blasting down the hill, weaving through the trees on a bermed line.

As I approached the first switchback I could see Paul flash by through the trees, going the other way.

A couple more switchback as the trail descends, the dirt in the trail holding enough moisture to provide perfect tread.

The trail was fast but there was one corner in the first few that was chunky and had no flow at all for me as I dropped off a large rock and had to dab to keep my tires on the line.

More fast corners, bermed for speed and into an area of the trail that had seen a lot of work, pavers have been planted in the line. They look like a lattice brick and they are about a foot wide.

The pavers are laid in three rows and form a steep bank that provided a path to rail high into the corner. There were a couple of sections where the pavers would form two, three, or four corners in a series.

The line along here also provided some straight sections with small kickers and rollers to catch some air.

The trail dumps you back on the Homestead road where you can elect to climb back to the top, climb to the point halfway up and ride Hide and Seek again, or cross the road and ride on down to the bottom of the system.

The last section of Hide and Seek has a short three quarter mile trail called Laura's Loop, looping off of it.

Laura's Loop is a smooth broad trail which winds up a mild grade to break over the top of a wide ridge and gives a nice fast rolling descent that does not require any technical skill.

There are two ways to get to Laura's Loop, ride up Homestead Rd until you reach the Hide and Seek crossing, or ride up Hide and Seek. The latter is a more technical line.

I think it is interesting that they would build a green trail that can only be accessed by riding a blue trail.

Sandy Ridge has some great riding, but I think it has been designed and built with the downhill rider in mind. There are no climbing trails per say but there is climbing on some of the trail although no sustained climbing except on the pavement and all trails are accessed via the road. 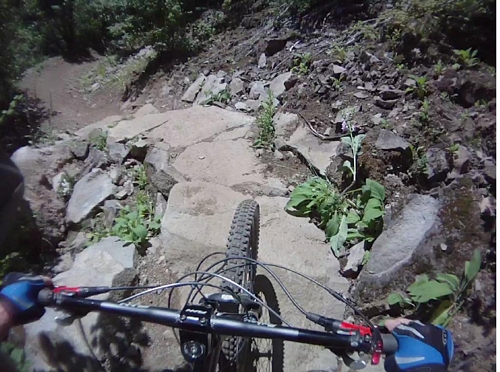