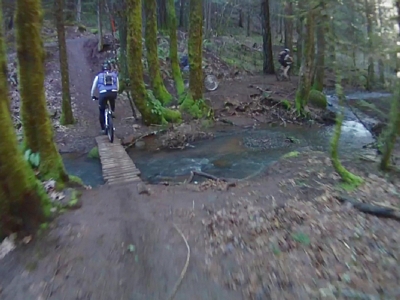 The April Fools Ride on the Post Canyon trails.

It was a beautiful almost cloudless morning as the shadow of my car rolled to a stop on the thick tire tracked mud. The sun was shining down through the naked trees on the first day of April. Just a few feet from the information board there were keep out and private property signs posted high in the trees on either side of what looked to be the trail head.

As I sat in my car wondering if this was the trail head a woman walking two dogs came down the trail and walked past the car. A few minutes later a couple of mountain bikers exited. Ok maybe those signs are meant to keep riders on the trail.

By the time I had gotten my gear on and my bike off the rack, my riding companions had shown up; Paul Norris, Guy Smith, Jessie Lopez, and Andy Crump.

Andy had ridden here before, although it had been awhile, he was going to act as our guide.

Within the first hundred feet or so, the track was very sloppy; a mud pit covering large portions of the trail, but it disappeared and firmed up very quickly.

A screamer on the way back, the well developed trail going up was accented by short bursts climbs on to moderate grades sections that were followed by small rolling sections. Small drops, kickers, and chuts, rollers into banked corners and flashing past skinny's that cross the creek highlight the return run. Skinny's that require total commitment in an instant, a moment's hesitation is paid in the currency of pain.

The main path is perfect - firm and well developed. The trail tracks high above the creek for a ways, then drops and follows the course of the creek to cross again and again on small wooden bridges. The bridges just wide enough for comfort and sketchy enough to require you to focus and maintain good speed just like anywhere else on the trail.

Trail 100 is called the seven creeks trail, named that because it crossed the creek seven times. I counted six crossings between the lower parking area and the official trail head at the upper parking area.

The small wooden bridges crossing the creek have real character, chicken wire on the approach for traction, ramps and/or angled ramps onto and off of the bridges.

Trail 100 heads away from the road to follow Flume creek on the west side for a short ways through some vine maple. The trail quickly broadens and is surrounded by large fir trees. The trail climbs at a moderate rate for a mile or so then takes a serious turn for some huff and puff action climbing up the hillside. At the second switchback out of three, there is a divergence of trails, one that goes straight on up through a narrow valley and one that switches back to continue the climb.

We continue to climb. Lowest gears and maintaining a steady pace gets me to the last switchback, which doesn't conform to the normal switchback. Instead the trail goes straight up. So I get off and walk for about fifty feet. Guy on the other hand, powered his way straight up the face of the mountain.

Turning again to the south the trail is a hoot, rolling along just below the ridge line until we get to "Family Man" riding area.

Family Man contains a large number of features such as long log rides, a long series of rollers, a pump track, and numerous small railed sections with a variety of shapes. Designed as a training area, a place to hone your skills and build confidence. All of the features are low to the ground.

In the middle of Family Man is a pump track, a series of dirt mounds and banked corners that have been laid out so that (in theory) you can ride around without peddling, just from the momentum created by pumping the front of your bike while passing over the dirt rollers.

After a few passes on the pump track, Someone told me to lock my front shock down, which made a significant difference in what I was able to do just using a pumping motion (I still had to peddle).

The log rides are made of logs that have been split and the natural curve of each used to form a twisting line that snakes through the trees. The first of these is a good foot or more in width and about that off the ground. There is a second that is more challenging a little higher off the ground, narrow in some places and a section that requires a step up from one level to another.

After ridding another section of small table tops and large rollers called "Middle School" we headed off on trail 100L.

The trail heads west out of Family Man and follows just below the ridge line until it enters into a new growth of trees.

As the trail winds its way through the new growth there is an intersection with trail 106 but we continue to follow the ridge line on trail 100L. The new growth gives way and we ride back under a canopy of fir trees. Trail 105 branches off 100L which starts descending down into the valley below.

The track is well developed and after crossing a spur road the trail starts to descend, now traversing somewhat below the ridge line.

The trail merges with another track that is labeled 158 and descends past a gap jump that looks like it has been abandoned.

The descent begins to intensify, I start pumping my way over some big rollers and then into a sharp switchback. The grade increases and I start picking up more speed, the calm rolling ride is gone, replaced by the rushing sound of the wind and snap of small sticks under my wheel.

The transverse is punctuated with a set of small rollers that look like they are spaced so that a couple of power strokes could kick up the speed enough to launch the gap between them. For me it turns into a bobbing pumping motion as I swiftly roll them into a big banked curve. Turning 180 degrees the trail drops like a chute that screams for this trail to be ridden hard down the hill.

The trail starts narrowing up a little and begins to follow the terrain a little more, leveraging the natural features as rollers.

The next switchback is very sharp and would have a pretty big penalty for missing it. The trail drops from behind a large fir tree into this corner that has been built up using log supports.

Following that switchback the trail is more developed; benched with of a lot of whoop rollers and some fast corners. There is a series of larger rollers before and after each of the next two inside corners with a table top as you coming out of the second corner. Even with these features this is still a cross country trail and does not require an advanced skill set to ride.

Finally a sprint through the timber as the trail starts weaving in and out while rolling and dropping at the same time, some great flow that just feels natural, exiting down across an old skidder road and to a wooden bridge that crosses Flume creek.

The sign post here indicates this is an intersection and we are merging with trail 116. The name of the trail is "Spaghetti Factory".

Spaghetti Factory started vertical, straight up. As we leaned into the hill and pushed our bikes I could hear a lot of lamenting, fear that we would be doing this for the next five hundred feet. But no, a few more feet and the trail turned a sharp right and is very ride-able.

The Spaghetti Factory trail takes advantage of the terrain. It climbs up and threads around switchbacks to gain some elevations then levels out or even descends at a slight angle long enough to recover and attack the next section.

Trail 116 chases the top of the ridge until it crosses the Post Canyon Rd. Shortly after crossing the road it turns into trail 114 for a very short distance and that ends at trail 110.

We become disoriented along here, there was a large tree down across trail 114 and we saw trail 117 heading down hill. As soon as we dropped down over the ridge we could tell we were on an ORV trail.

We made a couple of descents then started questioning our decision to take this trail. We could see another line above us and decided to bushwhack our way to that line. It too was an ORV trail, which we followed back up the hill to the location where we had gotten diverted.

Back on trail 114 we made our way around the downed tree and soon found trail 110 in a very short distance.

Trail 110 is the Mitchell Ridge trail and it started out as a double track but quickly became a screamer. The double track is right on top of the ridge; the timber along here is marked with signs indicating a timber sale which means the hill side will soon be denuded.

Following the top of the ridge, the trail was the steepest stuff we had seen all day. I would call Mitchell Ridge a primitive trail. None of the nice bench work and banked corners that we saw on trail 116 or trail 158. Instead this appears to be following portions of an old jeep track.

I don't recall seeing any trail markers and there were many places where the trail would split and drop over the gorge side of the ridge and then re-merge with the main line.

The trail has lots of places where the track is heavily rutted. That and the muddy condition caused me to slide out of control on a couple of occasions.

I have been on lots of trail like this and I am not suggesting this is not a good descent, it is but it is probably best done when the weather is a bit dryer for more control.

We hit the power line and took a look at the view. The trail was not clearly marked from here. There was a steep descent, which after reviewing Paul's GPS app looked like it would drop us right on trail 100 at the upper parking lot.

There was a jeep road that took off up the next ridge but was steep and slick, we did not see any bike tracks. We did notice a track in the woods between the jeep trail and the power line but it has not seen any use for some time.

We opted to descend and we were able to pick up trail 100 right where we thought it would be. The downhill run from here was optimal. It was so fluid that everyone had big grins at the end of the trail. 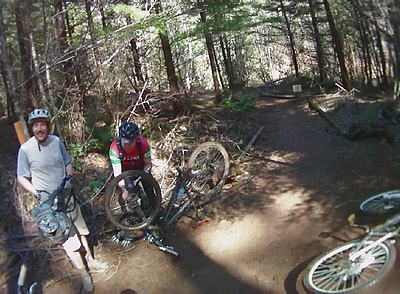