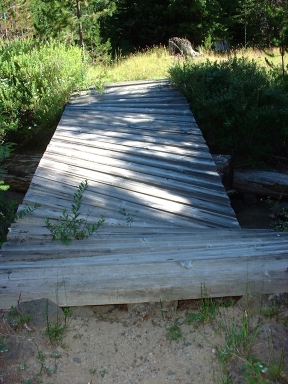 I have made two rides in this area.

On my first visit I had gotten a map from the forest service of the area. It is considered a beginner area, so I rode from the McClellan meadows parking area, following the map instructions along trail 150 heading north.

The trail paralleled forest road 30. The map indicates it is .5 miles. My odometer indicated it was .7 miles. The trail dumps you onto forest road 30 where it intersects with Curly Creek Rd.

After crossing forest road 30 I picked up a cross country ski trail running a few hundred feet south of Curly Creek Rd heading west and running parallel to Curly Creek R. It intersected with what I was guessing was trail 148 (according to a more detailed map of the area, this was 148C) on the west side of forest road 30.

It was a nice easy ride with gentle grade changes. This trail intersects with an old forest road, which I traveled East on until I was back at forest road 30, where it is blocked to vehicle traffic by wooden posts.

I turned around and headed back down this road (160), past the trail intersect for about a mile from forest road 30, trail 148 (or maybe 148B, I can't tell) heads off toward the south.

This is an interesting intersection, because there is a broken down bridge that is the correct way to cross the creek, and stay on the trail. The bridge has one broken log and one that is still intact. I found the bridge to be very sturdy, but walked my bike across here.

The road or double track that brought me to the bridge heads across the creek right below the bridge. If the crossing is made here, be sure to head back through the brush and find the trail coming off the bridge, because the road looks as though it continues on to the west. Good place to get off on the wrong trail.

The trail 148 heads toward the south through the forest. There were small clearings along the trail and it is a very nice ride.

In one of the clearings on one of my rides, I came across an elk and an elk calf on the trail.

At a little over half a mile the trail starts a gentle to moderate ascent. It makes a hard turn toward the west soon after the ascent starts.

This is another place where the trail can be misleading. I followed the false trail on toward the south until it disappeared in the woods after a few hundred feet.

The next 3/4 mile is a climb of a couple hundred feet in elevation that runs through the forest, over a couple of small foot bridges. A very good beginner climb and nice single track that meanders west and north to turn back on its self and come back around the ridge it is following to emerge at the edge of a clear cut.

The trail follows the edge of the clear cut back to the west until it hits forest road 3054.

According to the map I had gotten from the forest service, there was another trail, trail 154 just a few hundred yards up the road.

I also had a detailed forest map that showed the same trail 154, extending on across Hardtime creek, back across the forest road 3054, and ending on forest road 31 west of road 3054. The reality of it was that the forest service has clear cut the area where trail 154 was, and now there is no trail. I rode a mile and a half down road 3054 trying to find the place where trail 154 crossed back over but to no avail.

However I did find the portion of trail 154 that headed east from the clear cut. It was just a 1/4 mile west on forest road 3054 from the end of trail 148. I was able to ride over the top of the ridge and back to the point where the trail intersected forest road 3054 again. Not a very long ride and the forest service has not bothered to clear this portion of the trail. Nor is it marked. It is very visible from the road at the west end, even though there are no trail markings or signage

I followed this section of trail 154 from the west end, and had to lift my bike over at least 6 down trees. Even though, it was a nice bit of trail to ride.

When I hit forest road 3054 I had to check back up the road for about 20 feet looking for the trail. I finally spotted the trail in the forest, but there was no visible access from the road.

I carried my bike from the road, down an embankment into the woods and started down the trail, wondering if it would disappear because of the lack of maintenance. To my surprise, it did not. It became more defined and I was soon descending down a nice single track at a brisk pace. There was only one tree down across the path that broke the flow of a very nice downhill run.

The end of the trail broke out of the forest behind a gravel mound and I found myself in the Koshko snow part lot. At the very west end. Where they store the gravel.

After pushing my bike over the gravel mound, I looked back and it was obvious the forest service had decided to abandon this trail. There were no markings, nothing to indicate there was a trail there, the Secret Trail!

The trail to Old Man Pass parking area was just south of the gravel pile and was visible from where I stood. This would be trail 148 again.

I road up a short ascent to cross over the forest service road 3054 one more time, then a nice downhill run to Old Man Pass parking area.

There are a couple of alternate return loops.

The first would be to pick up the trail on the west side of the Wind river Highway at Koshko snow park area. Follow the trail northward for a couple of miles to the place where it is intersected by the trail from the McClellan Meadows Snow Park parking area.

The other option would be to cross over the Wind River Highway (forest road 30) at Old Man Pass parking area, and pick up trail 150. This trail looks like an old road, with a single lane running down it. The area is wide open, and a smooth downhill run for another half mile or so. Then the ride is a moderate climb for another mile back to forest road 3053, ending just a few feet from the McClellan Meadows Snow Park parking area. 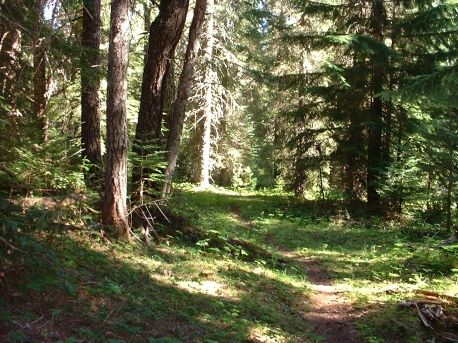