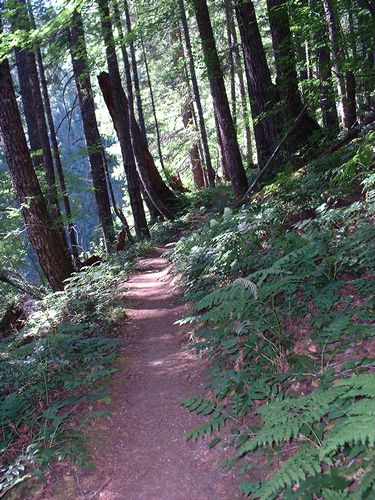 I am dedicating this page to Jerry and Andrea DeRuyter. They have contributed a lot of work to this and other forest trails in the Gifford Pinchot National Forest. Without them and the volunteers who join them, our trail system would suffer.

I started at the east end of the trail, Lower Falls Campground.

The first mile and a half is a "walk in the park", nice single track running close to the river. It has developed well because of the campers using this section between the road and the campground.

After crossing the road the trail starts becoming more challenging. The trail climbing for a bit and narrows out some quite soon.

This three miles was fairly steep uphill and downhill runs. Most advanced, experienced mountain bikers don't have any problems with this part of the trail.

I was an inexperienced rider when I took this ride on and I could not get the right gear to start on the steep up hills, or would run out of wind (still a problem after many years of biking). Then I would end up walking up the hill.

There are some exceptional views from the top of the cliff at just over three miles into the ride. Most of the ride here is about 800 to 1000 feet above the river. After about three miles the trail drops down to river level.

Like all trails, there are sections which are dangerous, this trail is no different.

A friend of mine was riding this section of the trail with a group of riders and his dog. As dogs will be, he was racing around a corner on the edge of a cliff and fell off. Sorry to say the pup did not survive the fall.

I have been told, so this is hear say, that an experienced mountain biker that was riding on a group ride also fell off the trail in this section and had to be life flighted out.

The next few miles runs just above shore line, with lots of short burst uphill and down hill. The trail here always seems to be right on the edge of the river, going up and down the embankment. Lots of lose rock and muddy little sections along this three miles.

At about 7-8 miles the trail comes around a knurly old cedar tree. The river along here is inviting and in another half mile the trail passes a swimming hole. Where when I came by there was a rope swing dangling from an overhanging tree that was very enticing.

Bolt Camp shelter is just a little further, not more than a half mile from here. And finally the trail turns back into a forest trail. It widens out some and levels out a lot.

The last four miles feels as though it is flat, and I crused along through a tall old growth section of timber. The forest is made up of both conifer and deciduas trees.

The final half mile or so the trail runs high up on the bank with a steep drop off to the river below. There is another final solid climb at the start of this last section.

The ride for me was a bit too much. I was fairly inexperienced and that three mile section on the cliffs was very strenuous.

The last four miles is some great forest trail riding and I would suggest this as an out and back. Ride as far as you feel comfortable then turn around and return.

The center three miles was in the worst condition as far as trail maintenance. Lots of little rock slides and bits of trail that have slid into the river. This section is always moving. I helped do a little work in a work party a couple years back with Jerry and Andrea DeRuyter. They have contributed a lot of work to this and other forest trails in the Gifford Pinchot National Forest. Without them and the volunteers who join them, our trail system would suffer. 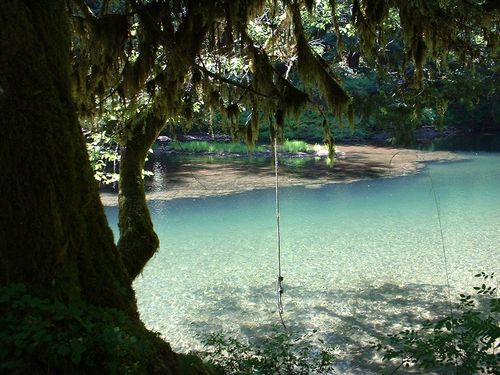