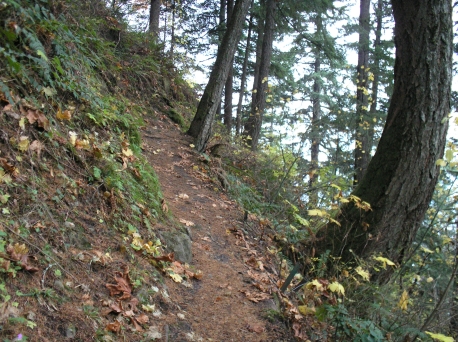 The trail starts in a inconspicuous spot, behind the sign that points to the two different parking areas. As soon as you exit the freeway, and turn to the south, you are looking right at it. The sign reads " TrailHeads - Historic Columbia River Highway State Trail - Wanclella Falls " with arrows pointing both east and west. There is no sign indicating that the trail right behind this sign is trail 400.

The trail starts out with a sharp incline and switchback. It crosses an old water pipe with a bridge that was built specifically to support the pipe. Further up the trail you can see the pipe was supported with numerous bridges across small gullies and ravines. Since many of the bridges have collapsed, I would assume the pipe line is no longer in use. The trail heads south for a short way, then switchbacks on itself and heads north. Traversing the face of the hillside the trail is soon heading east.

The water tank provides another way to access the trail, if you were to turn east at the sign where the trail head is, the road leads to a parking area just bellow the water tank. There is an old road bed just below the trail that I am sure leads down to the tank.

The trail meanders in a southerly direction, maintaining a very consistent grade. There is one place along here where I dismounted as the trail rounded a tree, it became very narrow, and was supported on the east side by pipes driven into the ground. I dismounted at this point on my way back down also. A few hundred feet further and the trail makes a switchback that was too steep and rocky for me to navigate either on the way up or on the way down.

The trail heads back toward the west crossing back over the ridge and again transverses along a very steep terrain. I rode most of this until the trail became so narrow that I felt uncomfortable. It was a short hike to another switchback that turned the trail back to parallel itself. I hiked my bike along here also, the trail was almost too narrow for both me and the bike. As I hiked along, there were many places the bike would slip off the edge of the trail.

The hillside was steep enough that as I hiked, I could have reached out and picked some of the bracken fern. A very short hike and the trail ascended to cross the ridge again. I remounted my bike and road up through the timber as the trail turned again toward the south. As the trail approached a sign, or trail marker, it gave way to an old roadbed.

The timber had thinned out, and was filled in with alder. The terrain for a brief period was flat, and downhill.

Continuing on down the old road bed, across a seasonal stream, the road broke out under the power lines coming up the hill from Bonneville. On the other side of the power lines, the road forked going both east and south. There was another trail marker which looked to me as though it pointed toward the south. I rode up this road, which paralleled the power lines for a few hundred feet until I came across another road coming from the east. On my way back I went down that road, which had an intersection with a sign that read trail 400. At this point I am not sure where trail 400 goes after it crosses the power lines.

I continued up the road I had intersected, crossing back under the power lines. The road climbed at a very steady incline through the timber. It was wide and covered with oak leaves that kept getting stuck between my bike frame and back tire, making a buzzing sound as I rode up the road. A very uneventful ride along here with nothing out standing, just a constant grinding pace.

After half a mile or so the road rounded the front of the hillside and started heading southwest. The din of the traffic from I84 started to fade as I rode further back into the valley that holds Tanner creek. After rounding another bend, the noise from I84 disappeared altogether, and I could hear a stream off in the ravine to the south of me. I had not been conscious of how much noise that highway makes until it was gone. A short distance further up the road, and I spotted a trailhead billboard.

Trail 401 starts at a creek crossing. A very picturesque setting. A couple of water falls setting back from the road with a large open area between the road and the falls. I was surprised to see the trail head, with a billboard like you would see down on a main road. I can't imagine anyone driving up here, even though it is a road. The trail sign indicates tanner butte is another 6.4 miles and the Eagle Tanner trail another 8 miles.

This was my turnaround point. I was tired from the long climb. It was 2.5 miles and 1,500 feet according to my odometer and GPS. The ride down the road was just as consistent as the ride up was. The mile on the single track though was very nice, with only a couple of areas where I dismounted and hiked. The same areas that had made me hike on the way up. The only caution I would make would be to stay back on the seat, because there are numerous water bars that come up quickly. This is most likely because the trail was covered with oak leaves, and sometimes I didn't see them as clearly as a rider would during the summer months. 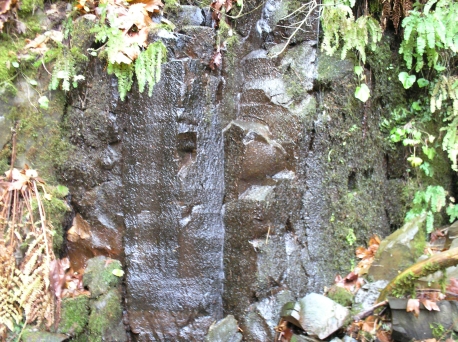