If you make a purchase from any of my Affiliates by clicking through from my site, I will make a 5% commission without affecting your purchase price.
This is how web page ads work. What ever web site you click through gets the commission.My Vendors: 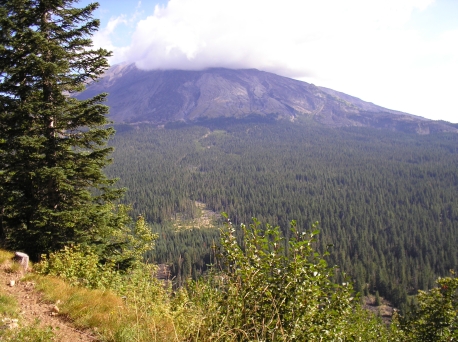 Name sounds nice. Starting at Red Rock pass, elevation 3200 feet. Both Toutle Trail No. #238 and Cinnamon Ridge Trail #204 are merged at this point. About 1/4 mile up the trail and Cinnamon Ridge Trail #204 splits off to the south. For the next mile the trail switchbacks up the face of the tree covered hill side. It is too steep in most areas for me to ride. So it is a hike for the first mile. About three quarters the way up, there is an old road bed that goes off to the west on one of the switchbacks. It is overgrown with small trees, but would be interesting to follow if on foot.

Once at the top of the hill, the view is spectacular. The trail emerges from the trees and rounds the knoll that forms a peak. Another tenth of a mile and there is another peak, the view here looks a little more toward the north, with Mt St Helens the focus. The ride now flattens out, or descends slightly for the next mile and a half. The trail runs along through a small forest with patches of open huckleberry fields and bear grass. Then it runs back over to the northern ridge and along the edge of the slope. There is one spot where the trees break and McBride Lake is a small gem lying below. The trail is a descent ride along here.

After descending about 500 feet, the trail turns to crap. The soil along here has turned to coarse ash, which is a presumption on my part, because it looks and feels just like sand. The trail starts back up another 500 foot climb over about half a mile. The sand is so lose and tore up from horses, that a slope that I would normally breeze up, is an incredible hart ponder, if I can ride it at all. Most of the next four miles is hike. Rough hike, because the horses have created a rut that is any where from six to eighteen inches deep and about a foot wide. A trench filled with sand. Hard to ride in even in the downhill portions, which seem far and few between. When there was a downhill section, my breaks sounded like they were getting sanded when ever I apply them. Scraping and screeching down short sections just to plod my way up the next hill. The day was a beautiful day, with the sun shining and temperatures in the mid 70's, but my feet are soaked after a couple of miles of pushing my bike up the ditch formed by the horses and having to walk in the wet dew soaked brush along side of it. Stooped over, the handlebars of my bike a foot to eighteen inches below normal.

This would be a great ride on horseback, or even a decent hike. The views from the ridges are dramatic. The trail runs along a couple of places where the ridge feels as though it is only a few feet wide. Dropping off sharply on the south side through the trees, the trail on the north side runs behind a rock and dirt embankment that is just a few feet high, beyond which the earth falls straight away for hundreds of feet. Much of the trail open with panoramic views in both directions.

After about four miles the trail intersects with the end of an old forest road. The track of the road going south away from the trail, an old fire ring on the ground just a few feet from the trail which is traversing the edge of a steep tree covered slope. Another half a mile, the trail crosses, then re-crosses twice more an old gravel road.

Finally the trail starts a solid downward grade. Running down the back side of the ridge that it has followed up until now. It now becomes a rocky, mixed dirt and ash trail. Running in and out of the trees, across short breaks of steep exposed hillside. It is still mostly a deep rut where I have to keep my peddles level, to keep from clipping them on the exposed rocks and roots protruding into the ditch. Its steep, forcing me to sit well back, not quite on the seat with my arms outstretched, griping the break levers and ridding my breaks.

After about a mile of this, the trail crosses another road. At this point, I am beat. I'm not a young man and I have put my self through as much as I can take. Checking the map I see this road ( road 8122 ) will take me back to forest road 81. That's it for me, I glide down the road, enjoying the comparative smooth ride. Now being able to relax the breaks a little and just glide along the road. The road doesn't look as though it gets much use, with the brush in some locations hanging so far over from both sides that I'm forced into the middle. After about a mile the trail cross over the road again. I stopped and looking both up and down the trail, I am convinced I made the right decision to take the road. Another couple of miles of down hill gliding and the road crosses over the Kalama river. After peddling a short distance I turn to the west and just sail down 81 to my destination, Kalama Horse camp ( elevation 2000 ft ).

By the end of the ride, my odometer indicates I've traveled almost eleven miles. The trail head said it was an eight point two mile trail, but by taking the road I probably added a few miles. Although that last five miles was all coasting and I did it in just over thirty minutes. Pretty incredible considering the first six miles took me three hours. If your young and in incredibly good shape, this could be an exciting and fun ride, with exceptional views. I would compare it to ski bowl's mountain bike park. I think that the trail coming down here was comparable, just not as wide in most places. Steep with rocky lose material.

My suggestion to anyone going to take this ride to do it in the opposite direction. Start by riding the road ( road 8122 ) as high up as you can, then pick up the trail. the ride in the easterly direction has to be better. Running the horse ditches on a downward slope for the majority of the trail. 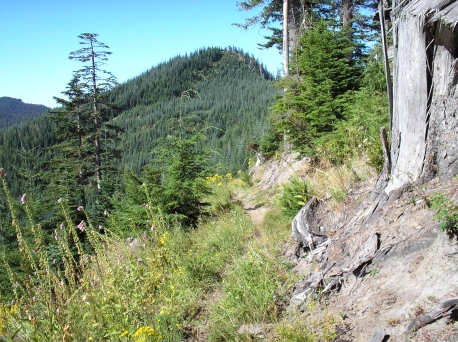